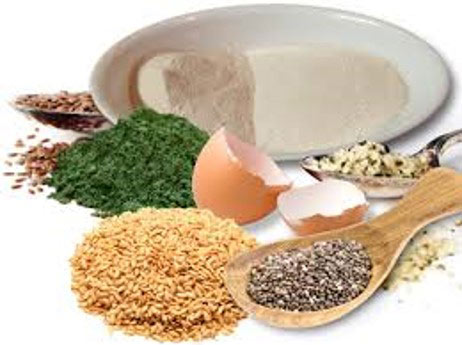 In the following paragraphs, we’ll describe important information on each of the most common active  ingredients, their source, chemical nature, and the reason why they’re added to the dog supplements.

MSM – One of The Most Common Active Ingredients

MSM (methylsulphynolmethane) is a natural sulphur containing compound which is believed to improve the flexibility of the joints. It also reduces inflammation and pain in human and animals.

Glucosamine – One of The Most Common Active Ingredients

Glucosamine is basically an amino sugar. It is similar if it is found either in human or dog supplements. Some ingredients in human supplements may be hazardous for the dog.

Glucosamine and chondroitin (described in the following paragraphs) are usually advised by veterinarians as alternatives of NSAIDs for the treatment of dogs suffering from osteoarthritis (inflammation of the joints). These compounds are advised because some dogs are unable to tolerate the side effects of NSAIDs.

Glucosamine and chondroitin also have slight adverse effects. However, the clinical benefit of using these compounds are dubious. The existing evidence is difficult to understand their clinical benefits due to the use of diverse manufacturers, compositions, salt forms, sources, strengths, therapy durations, regimens, and combinations of active ingredients. Future studies should be conducted to elucidate the uncertainty around the clinical benefits of using these agents and quantify any treatment effect that exists (Bhathal et al., 2017).

Chondroitin – One of The Most Common Active Ingredients

Chondroitin is a natural substance that is present in the dog’s cartilage, and when combined with glucosamine, it has an even more beneficial effect on dog’s joints.

Glucosamine and chondroitin, have been reported to improve joint function. Also reported to reduce the pain of manipulation and lameness. According to Beale (Beale, 2005), it was hard to recognize the precise nutraceutical treatment that leads to joint improvement. Studies have shown that the combination of chondroitin sulfate, glucosamine, and n-3 PUFA (Polyunsaturated fatty acids, for example, eicosapentaenoic acid (EPA) + docosahexaenoic acid (DHA), available in Fish oil) in the diet improves joint status. The possible effects of such improvement on dogs’ athletic performance as well as on their athletic life need further study (Vassalotti et al., 2017).

Polyunsaturated fatty acids (PUFAs) are classified as omega-3, omega-6 or omega-9 depending on the position of the last double bond along the fatty acid chain. The main dietary PUFAs are omega-3 [such as linolenic acid (ALA), docosahexaenoic acid (DHA) and eicosapentaenoic acid (EPA)] and omega-6 (such as linoleic acid and arachidonic acid). Omega-3 is mainly present in fish oils, flaxseeds, and walnuts, whereas omega-6 is found in safflower, corn, soya bean and sunflower oils as well as in meat fat.

Omega 3 fatty acids are also among the most common active ingredients of dog supplements. Several authors reported beneficial effects of some of the eicosapentaenoic acid (EPA) and docosahexaenoic acid (DHA) from fish oil, due to the reduction of inflammatory states (Goldberg and Katz, 2007).

Potential risks associated with omega-3 fatty acid supplementation should be evaluated in conjunction with their potential benefits. The National Research Council publication on Nutrient Requirements of Dogs and Cats indicates a safe upper limit of the combined amounts of eicosapentaenoic acid (EPA) + docosahexaenoic acid (DHA) as 2,800 mg/1,000 kcal of diet, equivalent to 370 mg per (kg body weight) 0.75 for dogs. This is equivalent to 2,080 mg for a 10 kg dog (Lenox and Bauer, 2013).

Vitamins and Minerals – Buy it here

Multiple vitamins and minerals are added in dog supplement and are among the most common active ingredients of dog supplements. Examples of minerals include, but not limited to, Calcium, Phosphorus, Potassium, Magnesium, Iron, Copper, Manganese, Zinc, and Iodine. Examples of vitamins include, but not limited to, Vitamin A, Vitamin D3, Vitamin E, Thiamine (Vitamin B1), Riboflavin (Vitamin B2), Pantothenic Acid, Niacin, Pyridoxine (Vitamin B6), Folic Acid, Vitamin B12, Ascorbic Acid (Vitamin C).

According to US Food and Drug Administration (FDA), dogs which are fed on commercially processed food, generally take a well-adjusted number of vitamins and minerals. Supplementation of vitamins and minerals might be necessary for dogs that are fed on a diet made at home. An experienced veterinarian or nutritionist should be consulted to get help in determining whether supplementation of vitamins or minerals is needed or not.

Often a question is asked if it is dangerous feeding dogs with vitamins. According to FDA and veterinarians, if a dog already consumes well-adjusted food, then taking excess portions of some of the vitamins and minerals might be harmful. Excess of calcium intake can cause skeletal problems, especially in large-breed puppies. Excess of vitamin A can damage blood vessels, cause dehydration, and also result in joint pain. Too much vitamin D consumption may lead a dog to stop eating, harm bones, and cause muscles atrophy.

All breeds of dogs can get benefit from probiotics. Probiotics aid in digestion and control the immune system. Probiotics yield short-chain fatty acids (SCFAs), which prevent the growth of bacterial pathogens, for example, Salmonella, E. coli, and Clostridium perfringens. Nusentia Probiotic Miracle, Nutramax Proviable DC, Nusentia Miracle Zyme, Purina Fortiflora, VetriScience and Vetri-Mega Probiotic, are among the top probiotics in the market.

Evidence in healthy dogs, as well as dogs with Gastrointestinal (GIT) and non-GIT illnesses, suggests some ef­fect of probiotics on the GIT microbial population, metabolic status (e.g. fecal short-chain fatty acids concentrations), and immune system as well as systemic effects (e.g. change­s in serum biochemical variables), but there are no clear clinical benefits. Similar but weaker evidence is available for cats, but with fewer controlled studies (Jugan et al., 2017).

Phytonutrients are the substances found in certain plants and believed to be advantageous to human and animal health, and help prevent numerous diseases.

It is an herbaceous plant. Previous studies have shown that the addition of Yucca Schidigera to animal feed (including pet’s food) can improve joint health.

A large number of polyphenolics and saponins are found in Yucca which reduces joint inflammation. It is an all-natural ingredient that offers anti-inflammatory and anti-arthritic properties. Yucca Schidigera is an important active ingredient and constitutes approximately 20% of dog foods on the market.

Yucca Schidigera can be included in pet food in different forms. It can be added as an extract, where parts of the plant are torn to shreds, dried, and finely grounded. Juice from the leaves can also be added. Yucca is mainly mixed with pet food to help minimize the smell of their waste. Studies have shown that pet food containing Yucca reduces the waste-odor as much as 26% (Cheeke et al., 2006).

It is one of the various compounds in Turmeric. It is, in fact, an active ingredient of turmeric. It is one of the most common active ingredients among herbal products. Curcumin has various properties including but, not limited to, anti-inflammatory, antibacterial, antiviral, antifungal, antioxidant, wound healing, and anticancer activities. Evidence has been published for its potency to target multiple inflammatory diseases (Henrotin et al., 2013).

Major limitation regarding the use of natural curcumin is the lack of evidence related to its bioavailability in dogs. Low bioavailability is the hurdle to predict its administration by oral route. For this purpose, curcumin has been dissolved in oil and then absorbed into chylomicrons, with no modification of its structure (Henrotin et al., 2013). In vivo, it was shown that, in white blood cells from 12 osteoarthritic dogs, gene expression involved in ‘inflammatory response’ and in ‘connective tissue development and function’ decreased more in dogs fed with curcumin than in dogs receiving Non-steroidal anti-inflammatory drugs. Curcumin also inhibited macrophage proliferation (Colitti et al., 2012). In this study, curcumin was administered in phytosome, a complex of curcumin and phospholipids, to enhance its bioavailability.

Taurine or 2-aminoethanesulfonic acid is one of the most common active ingredients which are used in dog and/or cat supplements to help support skin and coat health. It is an organic compound which is commonly found in tissues of animals. It is the main component of bile and can be traced in the large intestine. It is estimated that it accounts for up to 0.1% of total body weight of a human.

Taurine is naturally found in fish and meat. It is an indispensable dietary requirement for the health of cats as house cats, and various other members of the cat family, are unable to produce this compound naturally. Taurine deficiency causes degeneration of cat’s retina, leading to eye problems and ultimately result in permanent blindness. Such condition is known as central retinal degeneration (CRD). Taurine deficiency also leads to loss of hairs and tooth deterioration.

For dogs, taurine is not considered dietarily essential; however, its deficiency and dilated cardiomyopathy (DCM) are reported in large-breed dogs (Backus et al., 2006). It has been found that feeding certain commercially available diets may result in low blood or plasma concentrations of taurine, and may also be linked to dog cardiomyopathies. Supplementation of feed with taurine has extended survival times in these dogs, and this finding is not considered typical for dogs with cardiomyopathy. Blood and plasma taurine concentrations in dogs, suffering from cardiomyopathies, should be submitted for measurement of taurine, and supplementation of taurine should be advised during blood/plasma analysis (Fascetti et al., 2003).

We have summarised important information on selected ingredients of dog supplements. Various new herbal ingredients are now being researched in the laboratories, and clinical studies are providing essential information on their beneficial role on pets’ health. If you’re interested to know more about herbal or natural components of dogs or cats supplements and want us to do more comprehensive research on selected ingredients, then you’re highly encouraged to contact us at Fiverr.

Beale, B. 2005 Nutraceutical treatment in dogs and cats. In Proceeding of the NAVC North American Veterinary Conference, 8–12 January 2005, (Orlando, FL.).

Comblain, F., Serisier, S., Barthelemy, N., Balligand, M., Henrotin, Y., 2016. Review of dietary supplements for the management of osteoarthritis in dogs in studies from 2004 to 2014. Journal of veterinary pharmacology and therapeutics 39, 1-15.

Henrotin, Y., Priem, F., Mobasheri, A., 2013. Curcumin: a new paradigm and therapeutic opportunity for the treatment of osteoarthritis: curcumin for osteoarthritis management. SpringerPlus 2, 56.